The 12th National Games and Sports is hosted by Ugyen Academy this Year:2015

Ugyen Academy joins the Nation in celebrating 108th National day. The UA teachers performed Boedra on the very auspicious day, offering heartfelt gratitude to the Monarchs of Bhutan for guarding and keeping the people in their beat.

May we always be blessed and continue to prosper under the leadership of our Monarchs. We pray for sovereignty and everlasting peace.

Ugyen Academy is always in the foreground to set in motion of any community vitality programme and once again our School took the initiative to embark on another momentous gesture of promoting the English and Computer Skills to the honored monks of Talo Sheydra.

Guidance and training continued over a month and on 4th Dec. 2015 we arranged a day to congratulate their achievement and successful completion of Basci English Language Test (Level I,II and III)and Computer Basic Course.

We believe that this arrangement once again strengthened our relationship with the community where we hang out.

Ugyen Academy is always in the foreground to set in motion of any community vitality programme and once again our School took the initiative to embark on another momentous gesture of promoting the English and Computer Skills to the honored monks of Talo Sheydra.

Guidance and training continued over a month and on 4th Dec. 2015 we arranged a day to congratulate their achievement and successful completion of Basci English Language Test (Level I,II and III)and Computer Basic Course.

We believe that this arrangement once again strengthened our relationship with the community where we hang out.

Reception to the monk body

A team of UA kinsfolk received the estimable Monk Body which reached to Punakha Valley today. We are blessed with their cordial benediction that helped us to purify our scared minds one step further. 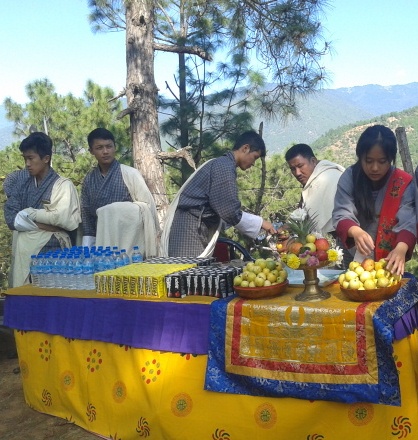 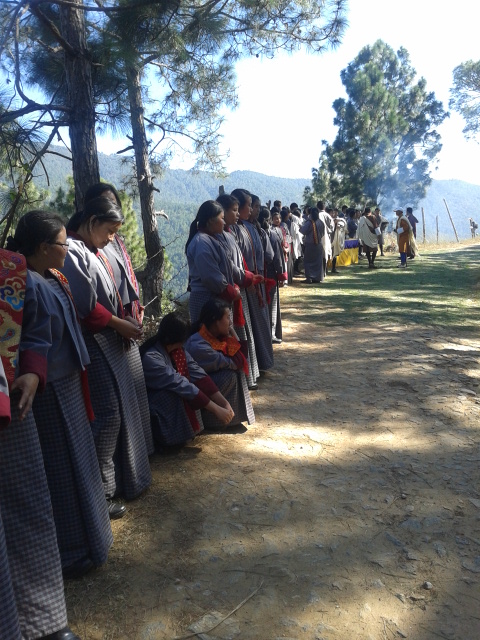 Yet another event to commemorate the 60th Birth Anniversary 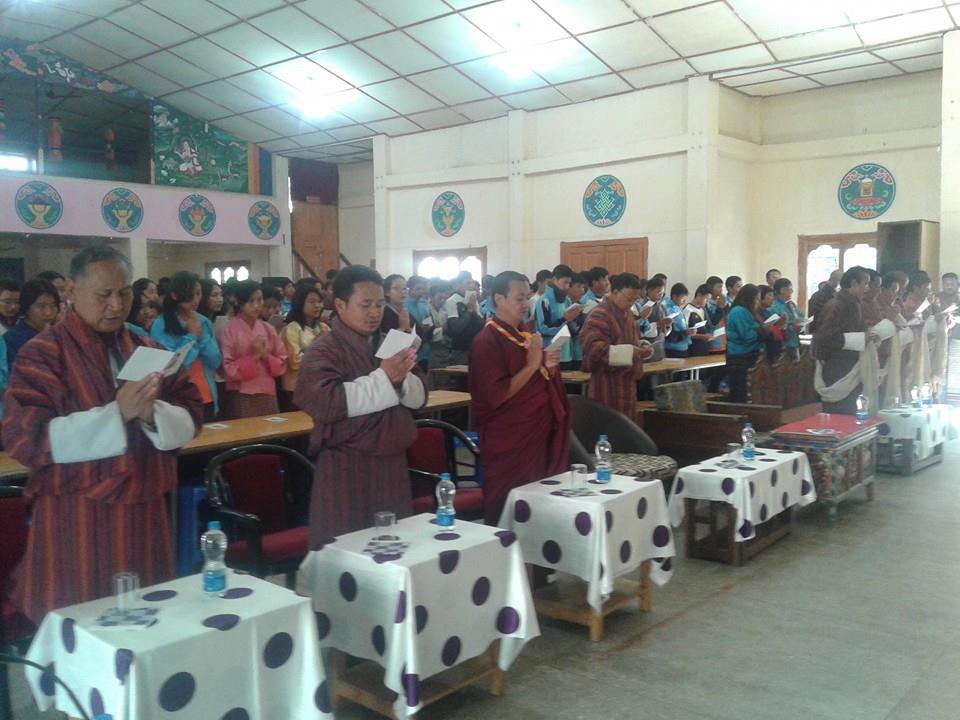 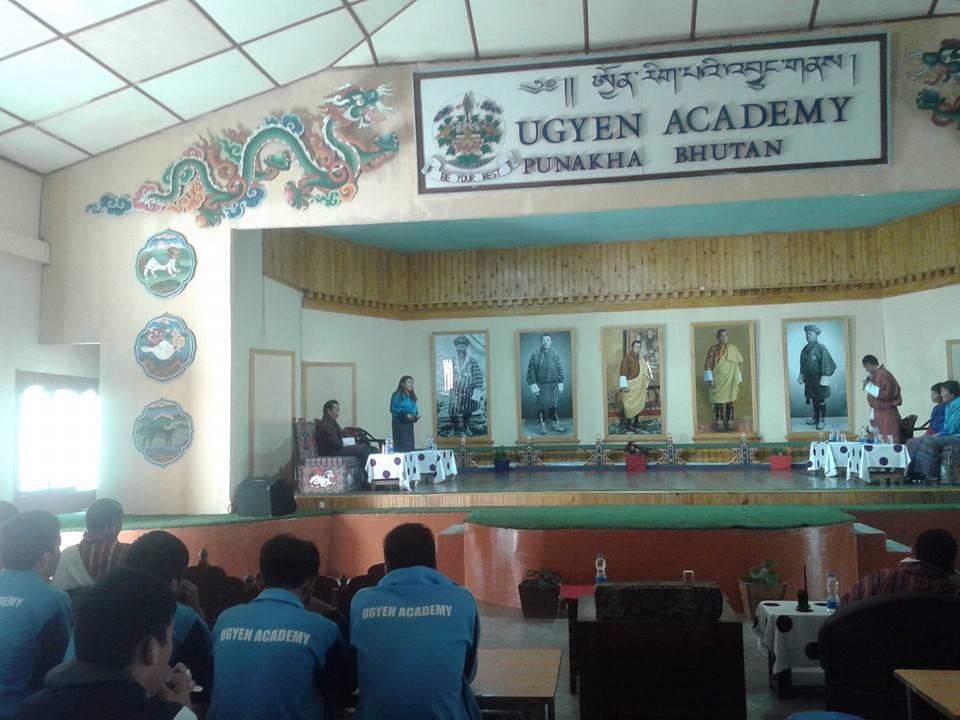 To commemorate the glorious 60th birth anniversary of the fourth Druk Gyelpo, a poetry competition popularly called “Tsangmo” was organized between the locals of Talo, Chhubu, Gumang and Tewang Gewog on 9th November 2015.

The event was organized with the sole purpose of celebrating 60th birth anniversary of His Majesty 4th Druk Gyelpo along with the objective to reviving and spreading the art of “Tsangmo”.

This is to notify that the literary week titled, 'Paying Our Tribute' is to be held on 26th -30th October. The Week long program is marked to commemorate the 60th Birth anniversary of our fourth Druk Gyelpo, His Majesty Jigme Singye Wangchuk along with His Holiness Je Khenpo Trulku Jigme Choeda and Her Majesty the Queen Mother Ashi Dorji Wangmo Wangchuck.

The following TWO schools are participating in this competition: 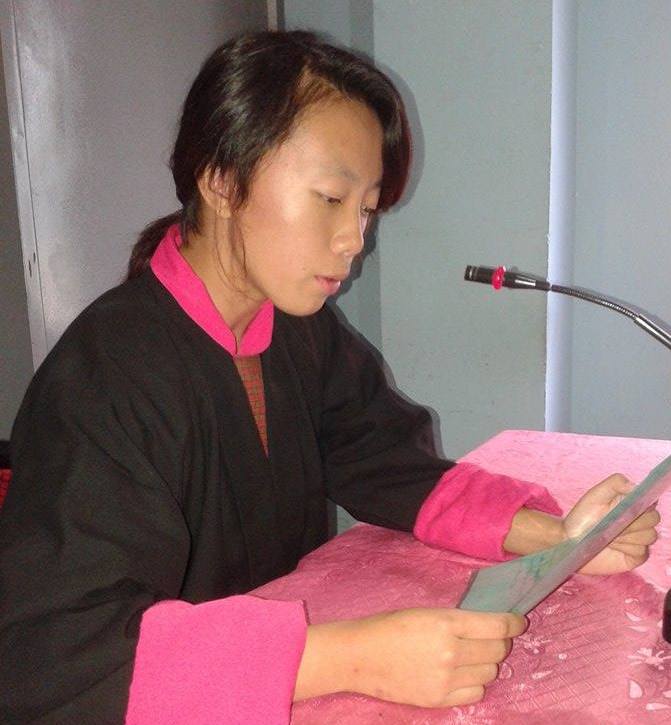 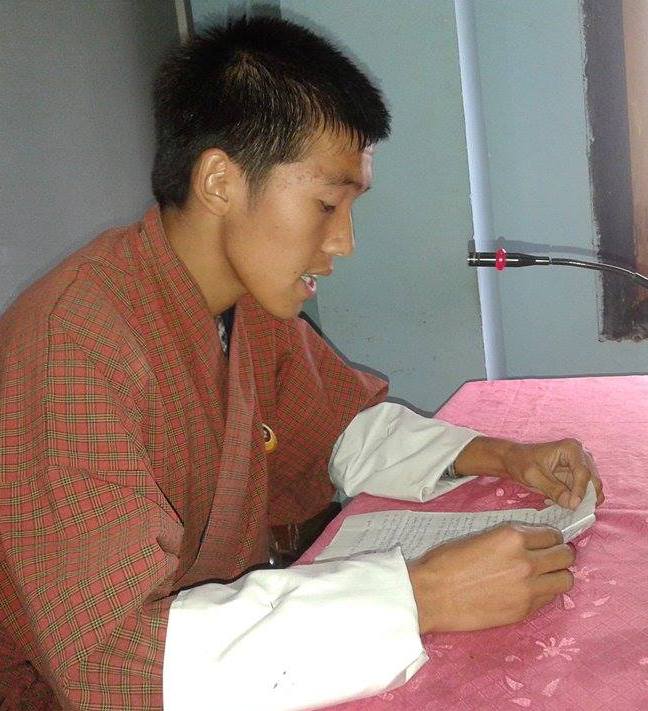 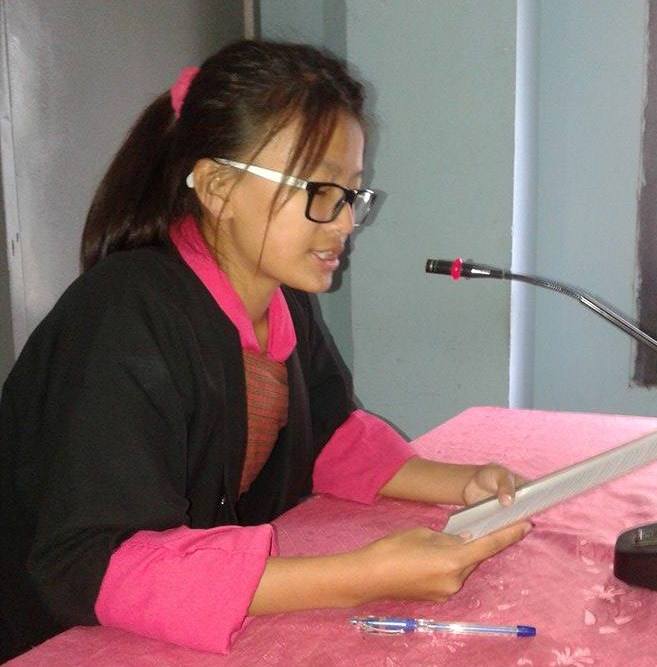 The above activities shall be conducted every morning through the Intercom.

Note: Ugyen Academy students will not be a part of the competition but we shall take it in the captain and volunteer students to read out the speeches as the gesture of “Paying our Tribute” to the Monarchs. 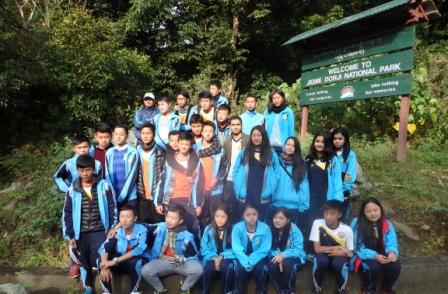 The introduction of the new subject, Environmental Science in class IX throughout the country, this year, was a humble gift to our Beloved Drukgyal Zhipa, the Environmental Champion of the Earth on His 60th Birth Anniversary and to our nation, to reassure the commitment of the Ministry of Education towards preserving the pristine environment of our country and the world at large. It was also one of the commitments of MoE on curriculum diversification initiative as envisioned in the Bhutan Vision 2020.

As a part of this noble initiative, Ugyen Academy has also taken up this new subject in one of the sections of class IX with the same vision and commitment. We have a very good and dedicated batch of Environmental Science students who are very much interested to continue with the subject throughout their studies if possible. To have their interest in the subject living throughout their life the subject we have decided to take the batch for a day’s excursion with the following objective/purposes:

U14 Football Match under Punakha Dzongkhag

The Victory of UA Junior team

UA’s junior football team was victorious in the Dzongkhag level football tournament (Under 14) held on 11th of Oct 2015 in Punakha at PHSS.

The match started at around 4’O clock, on Sunday evening and was glanced by Punakha Dozngkhag Dasho S.P as the chief guest. The avenue was in Lekithang’s football ground. The field was divided between orange and blue. The orange represented the UA team while on the other hand the blue represented Khuruthang Middle Secondary School team. The match was accompanied by cheers from the spectators, who gazed the match, notwithstanding the chilly weather. The boys were young and small yet they showed their full grace and enthusiasm for the game. It was interesting to note the great zeal from the young mind for the game. The event not only portrayed their talents but also showed much significance of progress in the field of sports in Bhutan.

The score board laid with 0-0 for both the team during interval. The team was seen to be carefully instructed by their respective coach during the short period of interval.

After the half-time both the team was seen to play with more energy, never the less couldn’t score a single goal. So the game resulted in penalty where UA team punched the air with triumph after being victorious.

The trophy was award to the winning team (UA) by the chief guest. It is a great event where each of the players showcased their talent and move importantly the players had been their beat.

As the hitch in one’s walk turns to pain in the help it is the sign of getting old. The recurring habits of thought that may be genetic or may be environmental which certainly worsens with time health is one vital component that needs day to day monitoring, but how many of us are aware about our health? It is easy to holler at people and remind about health but how much is done?

Bhutan Health trust Fund (BHTF) held nationwide program of taking a step forward rather than just evaluating the importance. The initiative taken in account of improving one’s health by walking an extra-mile when conceptualized. “Move for Health.” 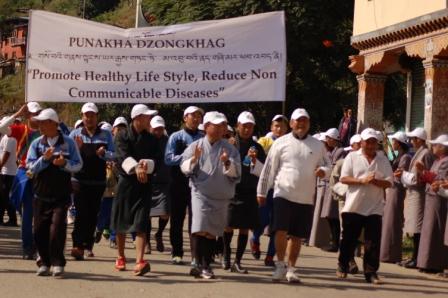 This programme is held once in a year and it is mostly aimed to implement good health for the people. This programme was started in 2002 by the former health Minister Lyonpo Sangay Ngedup. The adult walk for a long distance to Show or give an example to the youth about the importance of health.

There were three groups, Dasho S.P’s group form Lobesa till Khuruthang, RSTA’s group form Zomlingthang till Khuruthang and another group heading from Samthang towards Khurutang. The walk started at 7: 00am and it ended at around 10:00am on Sunday, where all distinguished guests and the audience had a brief discussion on health and raising of fund at Khuruthang. According to Dr Karma Yangzom, “The reason for this walk s to reduce the non-communicable disease like Blood pressure, diabetes etc, we need to prevent if before it’s too late, so we have to exercise and eat healthy food. “While the strong message reach to the crowd on how we can handle and maintain our health through regular exercises and taking healthy diet- nutritious food and amount to be taken , Mr. Kinley Penjor,  a lecturer of T.T.I said that it is an awareness to the youths and also to educate the community about the importance of the health. It was indeed the first time for him to have participated in such kind of programme and he expressed his joy, “It was very interesting and I am lucky to participate, it was an enjoyable moment.”

In this programme funds were collected all over the country. The reason for this donation was for the people who can’t afford for medical assistance. It is an initiative taken to buy expensive medicine / vaccine such as HPV for the girls to prevent cervical cancer.

“If the fund is not been collected than each girl have to spend Nu. 14000 to put the vaccine and the poor ones, due to lack of money can’t afford, so the fund is collected “said Mrs Zangmo, the district health officer of Punakha Dzongkhag.

Meanwhile Mr Bhim of P.H.S.S poured out his disappointment, “people were resultant to give money, they showed less interest in even giving Nu 50/- may be people were unaware of this contribution.” Mr Bhim was in the Samthang group and as they asked for donation from the people who were at the maximum illiterate they hardly knew about the programme and were reluctant in making contribution.

A student of Ugyen Academy, Redhaya said that everyday should be a health day as it will be a very good practice and exercise. Such programme is a good opportunity to aware the people about the health problems.

Mr. Sangya Wangdi, Teacher of Ugyen Academy further enlightened that all the Bhutanese should work and support and should be throughout the generation.

Dasho Dzongda of Punakha agrees that “If health is there than everything is there”, he also said that this programme would help the youths as there were youths who were very much involved in this programme. Even Dasho S.P stated that it is good to walk and this programme is basically to help the youths.”Example set by the adult today will definitely make youth’s come up with the same thing he said. “We can no more depend on the government, we have to work by our self” he added.

He also quote that “Health is wealth, how much ever you are rich without good health you are still poor”.

Coming back to the fund, the total fund collected form Punakha was Nu.693000/-. Ugyen Academy family contributed Nu. 48225/- along with the tea and shamday to the participants. Khuruthang town all together with the shopkeeper contributed Nu. 128600/- The Zomlingthang group while walking got Nu. 29000/- along with 4 US dolar. Dasho SP’s group collected a total amount of Nu. 122000/- and lastly from Samthang Nu.18663/- 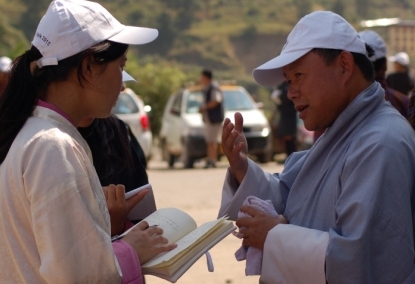 The exhibition for classes ten and twelve was held on 10th of October. The school witnessed an exemplary display of models and charts made by all the XII Science, Arts & Commerce and two sections of class X.

The concept and content was such that students get to think out of box. They not only depended on the teacher oriented lessons but went beyond their comfort zone. It was indeed hardwork  of students and respective teachers.

The theme for the exhibition was “Conceptualized by resource management and learning new things. A competition was also held based on the theme that every department keeps on “sustainable living”. There were classes with attractive themes and departments with core explanation which depicted better environment and conducive learning. 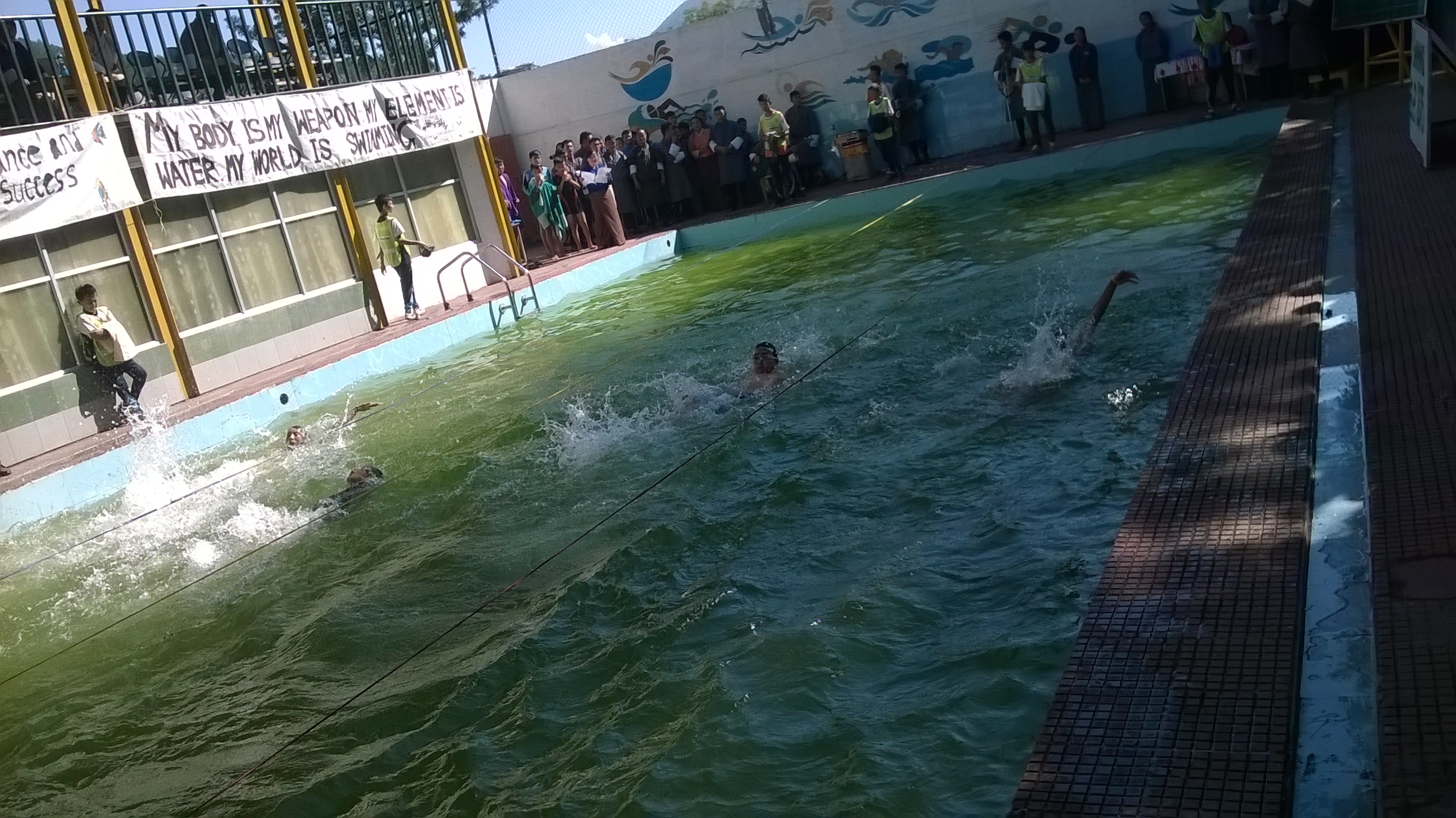 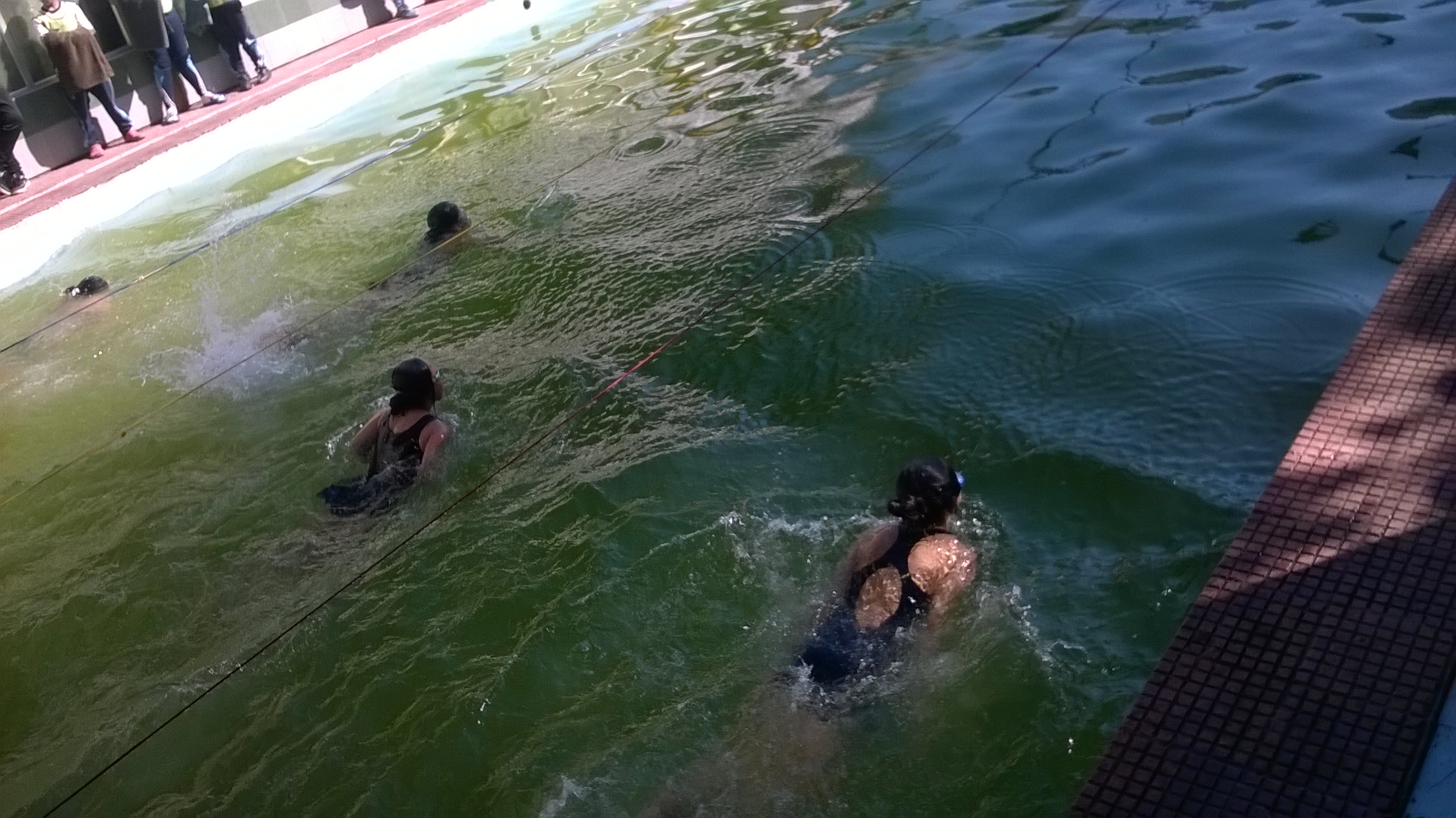 On Wednesday 30th of September, 2015 everyone was excited about the SWIMMING GALA. Everyone lifted their feet to catch a glimpse of the decorated swimming pool. The arrangements were picture perfect that there was no doubt at the hard work of the house captains, coordinators and the helpers.

The Dasho S.P, Chief DEO and the principals of other schools graced the Gala. An open exhibition was performed by the senior boys, gave a great enthusiasm to the spectators and the participants for the grand Gala. Hopes of the House Masters and the Captains amplified as they saw their team members warming up.

Different swimming styles were demonstrated: Freestyle, Backstroke and Breaststroke. The participants were all juniors from class VII to IX. The Gala became stiff as time passed, while the audiences were seen with lifting eyebrows and were impressed with the performance of every individual.

After two joyful hours of anticipation, the results were finally declared and medals and certificates were awarded to the participants.