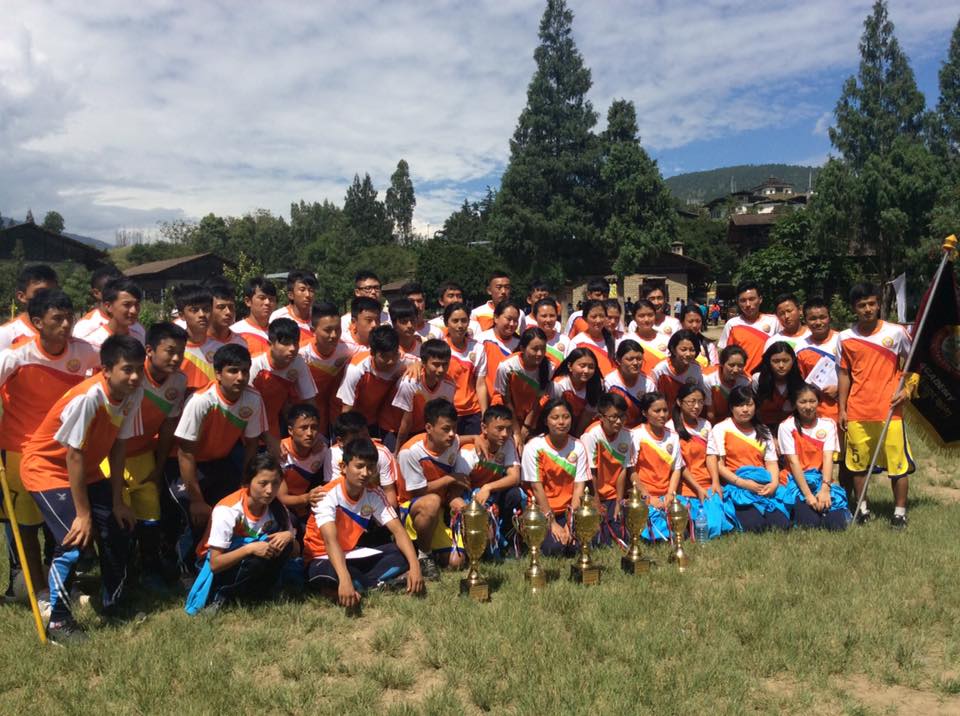 The regional sports meet was held at Bajo HSS, Wangduephodrang from 25th -27th September, 2015 where students from various schools of three Dzongkhags i.e, Punakha, Wangduephodrang and Gasa gathered in order to enhance the five S’s through sports.

The regional sports meet indeed provided students like us the opportunities to interact with the students from different walks of life and know each other better.

Amongst the different participating schools, our school Ugyen Academy stood victorious. Not only did we swipe away the trophies but also the hearts of the spectators by the talented players with ineffable discipline and sports ethics.

Winning the small players in the Dzongkhag level had paved a better way into the regional competition and by breaking the strong ties through it, UA will be joining in the National meet and indeed we will be counting onto heart-felt moments. 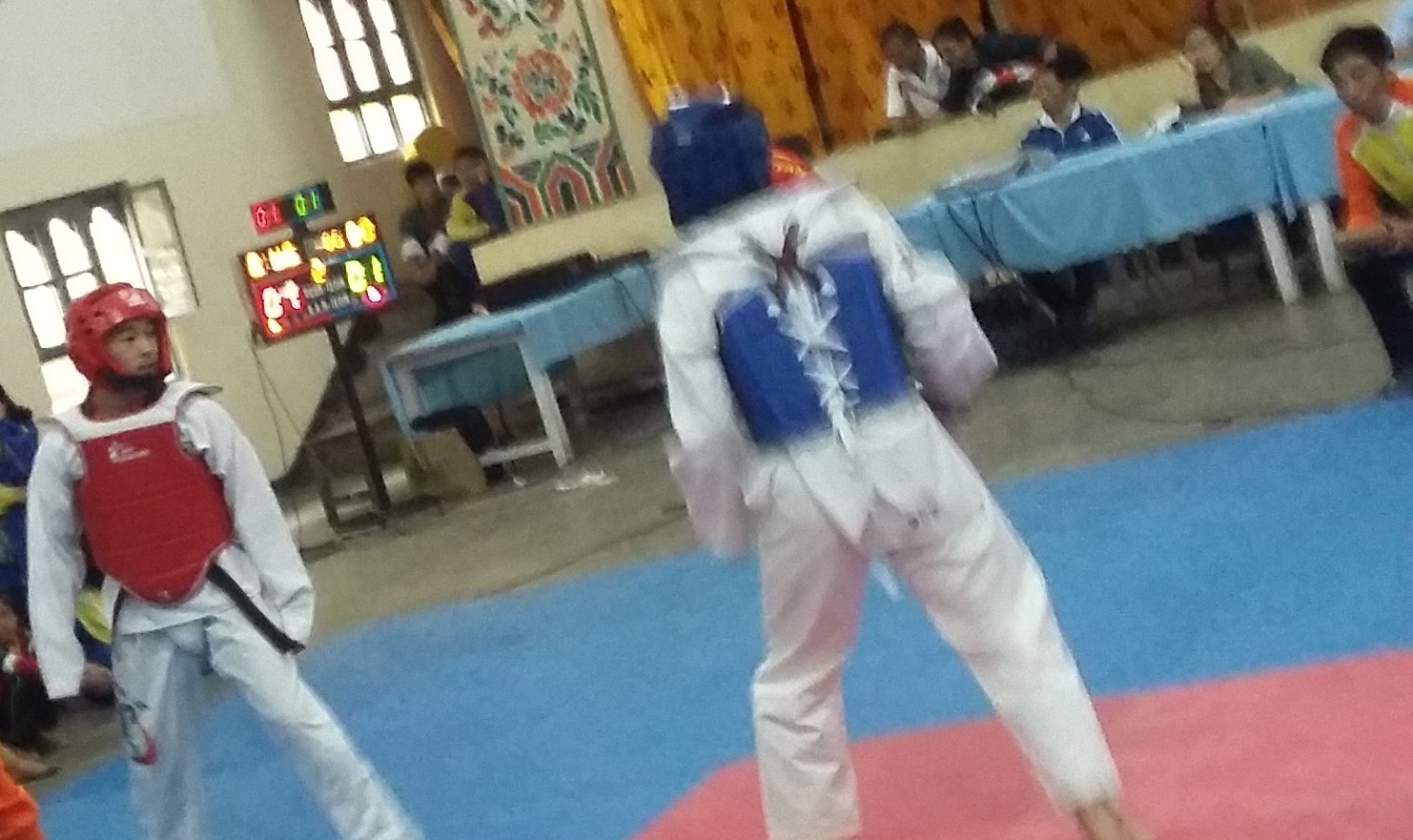 On Saturday, 26th of September, 2015 the 6thIntra Dzongkhag Taekwondo Championship was held amongst three schools of Punakha Dzongkhag. The event was held in Punakha Higher Secondary School. Ugyen Academy participated in the event and it was for the first time that Ugyen Academy took part in Taekwondo. The first time entry proved to be strong contender and gave tough play to already participating schools of Punakha dzongkhag.

There were 21 participants from UA and they backed up with 6 Gold medals, 3 Silver Medals and 4 Bronze Medal. It was observed that students had keen interest in Taekwondo and portrayed all the essential defense technique. 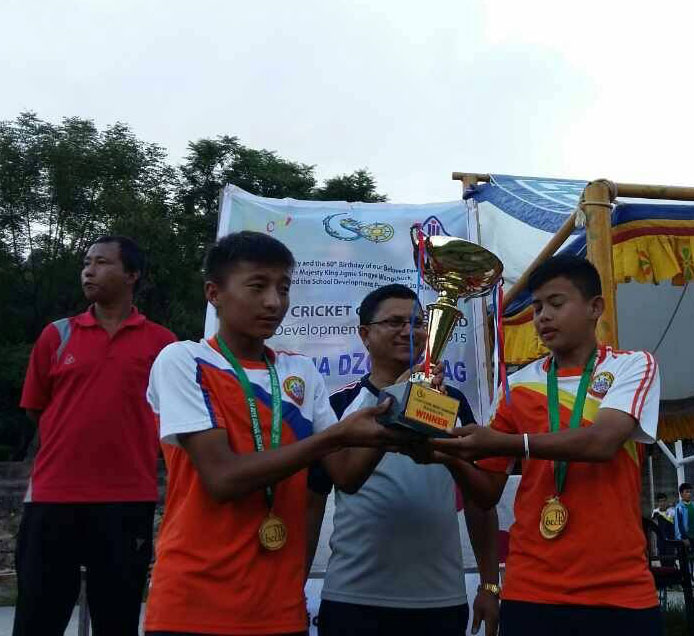 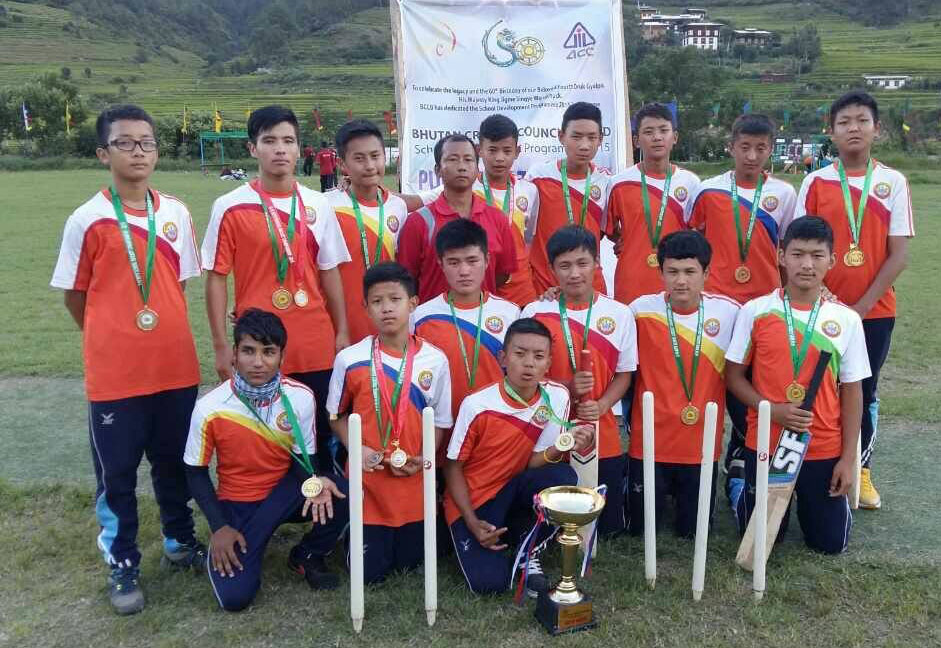 On 6th September 2015, UA boys lifted the U_16 Cricket Championship cup which was held at Ugyen Academy. There were total of four teams participating in the tournament within Punakha Dzongkhag, organized by Bhutan Cricket Council Board in commemoration of the 60th Birth Anniversary of His Majesty the Fourth Druk Gyalpo. 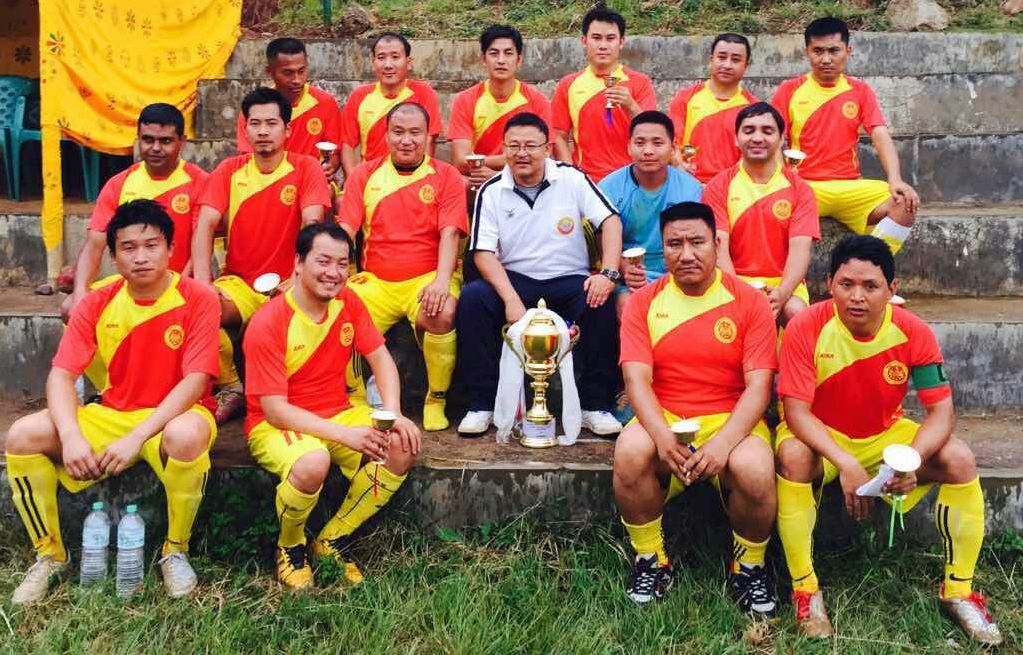 The Shering Thruendral league-cum-knockout tournament was organized by Tashidingkha MSS. It was organized to commemorate the 60th Birth anniversary of the Fouth Druk Gyelpo. The total of nine schools participated in the league from three Dzongkhags (Punakha, Wangdue Phodrang and Gasa).

On the 30th August 2015, the bicycle club was inaugurated by Dasho Principal of Ugyen Academy.It was helped and organizied by Lop. Kiba Tshering . On the opening day of a new club, seven UA teachers rode 20km from Khuruthang to Punakha and then back to Khuruthang.

This is a new start to old sport as UA always creates new way to develop itself.

With the new recreational establishment, we aim to:

1) Provide skills to the students in internationally celebrated sports.

2) Enhance the availability of recreational facilities in the school.

3) Improve the physical fitness of the students.

Moreover, it is started with the ultimate aim to produce Bhutanese cyclists in the cycling world.

What exercise is to the body, reading is to the mind. With same objective, the Mountain Echoes program held at Tarayana center, Thimphu on 20th of August, 2015 was organized to commemorate the Reading Year along with the 60th birth anniversary of His Majesty, the Fourth Druk Gyelpo, Jigme Singye Wangchuk. The Sixth session of Mountain Echoes is very important, especially for Bhutan as we are celebrating  the National Reading Year. The programme consisted of national and international writers such as Lucy Hawking, the daughter of Stephen Hawking, writer of George series.Students from different schools interacted with the international writers as well as the Bhutanese writers Rinzin Rinzin, Pema Gyeltshen and Chador Wangmo.

We were welcomed at the Tarayana center with a welcome dance by the Royal Academy of Performing Arts. The first session called Cosmic Treasure Hunt was with Lucy Hawking and Paro Anand introduced by reading expert Amita Sathe Bambawale and followed by series of presentations.

The journey then took us to VAST gallery where there was an Art Exhibition by Bhutanese women called "Her Expression" II. The Art Exhibition compromised some of the paintings from the private collection of Azhi Sonam Dechen Wangchuk.

With that our programme ended but it instilled within us an understanding of how important reading is. The programme was a very wonderful experience and also a fruitful one.

On 16th August 2015, the finals of the School Cricket tournament were held at Ugyen Academy. There were total of four teams participating in the tournament within Punakha Dzongkhag, organized by Bhutan Cricket Council Board in commemoration of the 60th Birth Anniversary of His Majesty the Fourth Druk Gyelpo.

Nevertheless, the super league tournament was played between UA and PHSS who had qualified for the finals in both the categories (Girls and Boys). Punakha HSS clinched the championship by two wickets in girls’ category and UA boys defeated the Punakha HSS by three wickets and clinched the trophy for 2nd consecutive year.

The objective and the main purpose of conducting such a tournament were to develop the cricketing skills of the students and mainly to select a squad consisting of 14 players for upcoming U_19 National District Championship. Out of 14-players, 7-players (boys) and 6-players (girls) have been selected for U_19.

Today  the School is having the third round of School Kurim. It is indeed a blessing because  of the Kurim Pelchen Dorji Zhenuyi Choga being headed by Lopen Tshedep Kaka mainly for the well being of all the students, teachers and all sentient beings at large.

An ostentatious and an examplary feature of this pooja is that the offerings(tshogs) are none of the packaged items but all are  the homemade ones.Such a step has been taken mainly to reduce the waste and also to ensure offerings with unadulterated items.

Such religious activities are in pipeline  and yet to be perfomed in the coming months for the physical and moral posperity of all the inmates of the UA family.